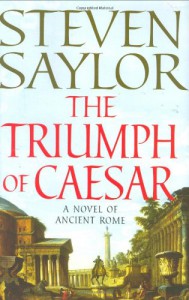 I had been putting off starting this novel knowing it is the final book in the Gordianus the Finder series. Well, I started it and now I'm finished with it. I feel slightly empty. I feel slightly disappointed. There were a few things the bothered me about this novel. One was the lack of Eco. Eco has more or less disappeared from the novels since that whole deal with Catalina. I was always a little bummed out by that aspect of the story. The idea of a father/son, Gordianus/Eco team was rather intriguing. Two, you can't just go and tease Diana as a replacement. Diana has always been a background character (albeit an important background character) but suddenly in this final novel, the reader is suppose to believe she's the heir to the Finder? I'm not buying it. I'm not saying it's not possible. The whole situation just feels forced and rushed. I would have liked to have seen some more development. Three, I miss the back and forth of Mopsus and Androcles. I could read a series of novels featuring the antics of those two trouble makers.

Overall, I found this novel to be a fitting end to Gordianus the Finder. Would I like to witness the end of Caesar through the eyes of Gordianus? Sure, but I'm content with this. There doesn't need to be anymore.
Tweet