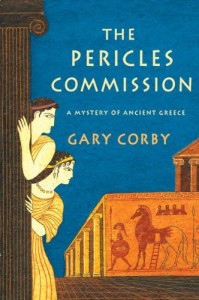 The Democrats and the Conservatives are fighting. I guess democracy has had the same problem since the beginning of its time. Maybe we need a Nicolaos instead of a Mueller?

I've immediately gone ahead and ordered the next three books in this series. It is pretty rare for me to like a first book in a series as much as I liked this one. I usually find them clunky, full of random back stories, and full of characters who lack personality. This book did have clunky parts. However, I found the cast of characters to be charming and funny.

Nicolaos is to Ancient Greece what Gordianus the Finder is to Ancient Rome. The similiarties are striking both in character and story. The difference is in the setting. Much like Saylor does for Rome, Corby makes Greece come to life. You can almost taste the watered wine and smell the back alleys. Also as noted above, Nicolaos' supporting cast is wonderful. It's a big larger and more eclectic than Gordianus' which adds a fun element to these novels that I don't associate with the others.