The Lager Queen of Minnesota 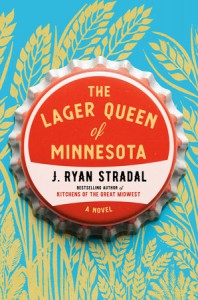 Without going back to look, I can't remember what my previous choice for favorite book of 2019 was. It doesn't matter. Whatever it was, it has been dethroned. The Lager Queen of Minnesota is and will remain my favorite read of 2019.

This book demands that you read it while eating tater-tot hotdish and listening to Prince. It was absolute perfection. The characters. The setting. Everything. I laughed. I cried. I cried a lot. The women in this novel tore at my heart. I knew these women. I was raised by these women. This book made my heart ache for the carefree days spent following my grandma around in her garden or standing in her kitchen carefully measuring out ingredients to make something beyond delicious.

It wasn't just the women who made me emotional. It was the beer. I'm a huge fan of beer. The guy who picks up our recycling every week would probably argue I'm something a little more unhealthy and he only takes clear glass. The beer in the book wasn't just beer. I could see and smell the Grain Belt, the Hamms, and the PBR my grandpa use to drink. It depended what was on sale. Every night for supper, he had a beer for supper. Even towards the end when the doctors told him he wasn't allowed to have beer with his medication. He didn't care. He fought in WWII. He was going to drink the beer. It was only one can. And honestly, it wasn't even one can. For 57 years, he split that one can of beer every night with my grandma. Even after she died, he only poured himself half a can.

My own personal nostalgia aside, I highly recommend this book. It's just as Minnesotan as giant roadside attractions (shout out to the World's Largest Ball of Twine Made by One Man) and Sven and Ole' jokes. To some it might be boring but it's full of heart and people you won't easily forget.

Edit- I've done the leg work. It seems my top books this year have been A Dangerous Collaboration by Deanna Raybourn, Here Be Dragons by Sharon Kay Penman and Virgil Wander by Leif Enger. I find it rather strange that two books about Minnesota by Minnesotans landed in my top five. I'll be the first to tell you Minnesota is kind of boring and ordinary.