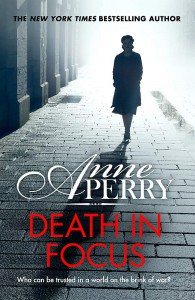 Death in Focus is the first book in a new series by Anne Perry. It features Elena Standish, a seemingly ordinary girl who is trying to develop a career in photography (see what I did there?) in the years between WWI and WWII.

I'm having a hard time understanding how Anne Perry is going to make a series out of the adventures of Elena Standish. Mainly because Elena should have been dead a thousand times over by the end of the first book.

This book was pretty awful. I've been working on putting down books that I know are going to be one star reads for me. There are too many books waiting for me. Why waste time on books that aren't going to be any good? This book was an exception to that rule. Be warned there are a lot of potential spoilers ahead.

Elena was the biggest problem with this book. She was flat out stupid. At several points during the novel, the reader is reminded that Elena has more poor choices regarding men before. We aren't told exactly what her previous flame does. All we know is he betrayed England during WWI. He made her look like a fool. The reader is told this several time. Elena tells herself this several times. One might think a person would learn her lesson. If you can't trust a man you knew for years and found yourself to be in love with, why in the world are you trusting a man you met on the street in a foreign country? I have no idea what the answer to that is. Elena does though. Or at least she must have a good reason because that's exactly what she does. More than once.

Elena decided to abandon her sister in Italy and go fleeting to Paris with a man she just met. The trip to Paris is interrupted when her new love interest is given a secret mission that requires him to immediately go to Berlin. "I'll just go to Paris and wait for you." That's what you might think Elena would say. You'd be wrong. Elena decides she should go to Berlin (a current powder keg where Hitler is doing everything he can to throw a match) with this man she knows nothing about.

Long story short, the man ends up murdered. Elena ends up on the run. She spills her guts to every stranger she meets but then can't figure out why the German police are after her. Meanwhile in England, her grandfather who use to be the head of MI-6 can't seem to come up with a plan to keep tabs on Elena and get her out of trouble.

This was one of the most absurd, unbelievable novels I have read in a long time. I really only finished it thinking that the publisher was pulling a fast one on readers. Elena ends up dead at the end of the novel and there's actually going to be an entirely different series. Hopefully a series featuring Elena's Luger wielding grandma, Josephine. There's your series folks. If it weren't for the anachronistic political discussions sprinkled in, I would have forgot I was reading an Anne Perry novel. This had none of the trademarks of her Pitt, Monk, or even Christmas novels.